Here, animation sequences of game figures, fabric flowers, fashion drawings, patterns, newspaper images, autobiographical notes, paper bags and legal files, as well as medical images are overlaid to produce a film-collage. They delineate a 20th century biography: growing up in the Nazi era, teenage years in post-war Germany, the building of the Wall, and life in the GDR as well as in a united Germany after the fall of the Wall. It is a story of escaping and conforming, playing along and skepticism. 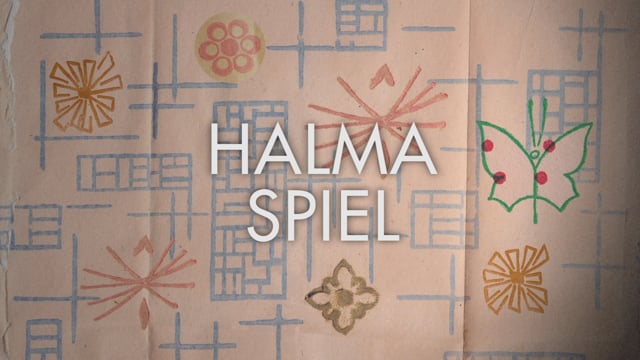 “Collaged associations from found objects. One’s own family, three Germanys along with its treacherous sub-chapters, the taste of life. The mother was a passionate Halma player. On the one hand. On the other hand, she tailored and was a fashion designer in the GDR. Her journeyman’s piece: sewing with piping, tucks, bartacks and neckline embroidery. You have to love this film just for the fact that these words, believed to be dead, find themselves so delicately reanimated here. Next to everything else!”

“Almost everyone who ever had to sift through their parents’ documents and mementos has probably asked themselves what to do with all the bits and pieces that have accumulated over the course of a lifetime. Betina Kuntzsch uses documents, static footage, snippets of paper, fabrics, film and much more to create a cinematic collage about her late mother’s life.
The game of Chinese Checkers serves the director as a thematic thread leading through the mother’s life. It is a guideline that artfully and skilfully stops the documentary from getting out of hand and losing its shape with the number of found objects.
Right at the beginning, the viewer learns that the game of Chinese Checkers always accompanied Kuntzsch’s mother – throughout her childhood in the Nazi era, in the GDR and even after the fall of the Wall, it was a recurring connection and means of communication in her life. So, it is obvious that director Betina Kuntzsch has made the game into the linchpin of her documentary. In Betina Kuntzsch’s film, however, Chinese Checkers is also equated with standing in line and muddling through, the passing of time in prison, and somehow also the networking of the present. And, as we are told in the film, Betina Kuntzsch’s mother ‘was a good Chinese Checkers player’.
Plain, coarse GDR paper, cutting patterns or pastel fashion drawings: To the jury, the selected finds from the legacy seemed like epitomes of their time. The film moves in a linear way from the Nazi era to the present day. . It tells of work in the harvest and the sudden disappearance of Jewish schoolmates, the flight from the Republic and prison, a career as a fashion illustrator, the opening of the border and life afterwards. Kuntzsch allows the hexagram of the Chinese Checkers board to appear again and again, sometimes as a Star of David, then again as a home-made game in prison or as a neuronal network structure.
During their discussion, the jury members were amazed that Kuntzsch’s film succeeds in relating an entire life in fifteen minutes, without seeming to be condensed: CHINESE CHECKERS appears associative and continuing. The fragments from the mother’s legacy show only facets of her life, but represent much more. CHINESE CHECKERS stands for life under three systems of government, three regimes, the three forms of German state in which the mother lived.
Every frame of the film, the jury notes, resembles a postcard. The fact that Betina Kuntzsch comes from a household of artists and architects is obvious. But the jury also noted gaps in the biography that the filmmaker may have left out consciously, or perhaps unconsciously. And yet the jury had the sense throughout CHINESE CHECKERS that Betina Kuntzsch knows exactly how to abstract things and is striving for objectification.”